The lingering hopes of the most optimistic Iraqi fans were finally put to bed as Iraq’s World Cup qualification campaign for Russia 2018 came crushing down against bitter foes Saudi Arabia. Political and religious reasons make this fixture a tasty one, but with the most recent Saudi victory still lingering over bitter Iraqi tongues, revenge was in the air and the world watched in anticipation. Only a few Iraqis have forgiven the Qatari referee for handing Saudi Arabia victory in the first leg but this time around, nobody could blame the referee for yet another meager performance.

Iraq visited Jeddah, in the stunning King Abdullah Sports City stadium, where 60153 fans attended the game. With Saudi so close to World Cup qualification, the fans put on a spectacle to rub salt into the wounds of opposition fans and players alike. Watching the home fans spur their side on to a crucial victory, Iraqis were yet again left scratching their heads whilst wondering how different their qualification campaign would have looked had Iraq been able to host their ‘home’ games in their actual country. The spectacle proved a huge contrast to the small handful of Iraqi fans who were able to attend the ‘home’ game against Australia recently, which was held in Tehran, Iran.

Iraq started the game in positive fashion and took the game to the Saudis. The players pressed high up the field and forced the Saudi defence into mistakes, which created many half-chances. Tame efforts from Ali Adnan and Hammadi being the only notable instances the opposition goalkeeper was tested. However, not many real chances fell to the Iraqis early on. It was the Saudis who in fact created the real first opportunity of the game, where a quick exchange of passing saw Yahia Al Shehri through on goal on the 31st minute. His drilled effort squeezed passed Hameed but a sprinting Ahmed Ibrahim somehow miraculously kept the ball clear to keep the scores level.  Only 6 minutes later did Ahmed come close to giving his side the lead, where his thumping header was cleared off the line after a beautiful inswinging Ahmed Yasin corner kick. Ahmed Ibrahim yet again showing off his attacking instinct in the opposition box after also coming close against the Australians. Iraq had an opportunity to take the lead once again right before halftime when Ahmed Yasin picked up a loose ball yet failed to find a teammate when breaking against two Saudi defenders. Muhannad and Hammadi were available but the AIK winger decided to go for goal himself – a poor choice.

Once the second half whistle blew, Saudi Arabia took full control of the game and made it impossible for Iraq to dictate any area of the pitch. With the midfield now stretched, it was inevitable that a goal would be conceded. A quick interchange of passes in the middle of the pitch saw Yahia Al Shehri unchallenged outside the box. His shot from thirty yards was unstoppable and flew into the top corner of the net – a flailing Mohammed Hameed failed to get anything on the shot and Saudi took the lead.

Once the ball had crossed the line, the game was essentially over. Iraqi heads dropped and all creativity was sucked out of the side. As witnessed in the previous game, the lack of leadership in the team was once again evident the moment the team had conceded. The players looked around at one-another for guidance and saw nothing but distraught faces – it was a team without natural winners and leaders. Game over.

The remaining half an hour was simply a blur. Few chances were created and the play was forced through predictable crossing on either flank. Ali Hosni, Alaa Abdulzahra and Mehdi Kamil were all brought on to inject some pace and creativity into a lethargic team, yet none were able to do anything of note. It was a relief once the referee’s whistle had finally called for full time. Ahmed Ibrahim, Dhurgham Ismail, Saad Abdulamir, Ahmed Yasin and Mohammed Hameed all had solid games but the team was once again not at the level required. The Saudis played a more controlled game, passing the ball well and dictating the tempo to their liking. On the other hand, Iraq rushed with every attack and looked to break the moment they received the ball – at one point, the home side at 60% possession.

Furthermore, the Iraqi players looked to go for goal rather than pass the ball on numerous occasions. Although it may appear that they are being greedy, the true cause of that is far more troublesome. With the squad chopping and changing so regularly, a large number of players feel pressured to do the spectacular in order to remain in the side. It’s no wonder Ali Adnan, Mehdi Kamil and Saad Abdulamir all took shots from distance. Overall, there are numerous contributing factors beyond this that have made this qualifying campaign one of the worst in Iraq’s history, however, we will delve into those areas on another day. 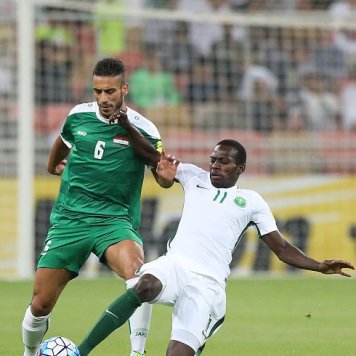 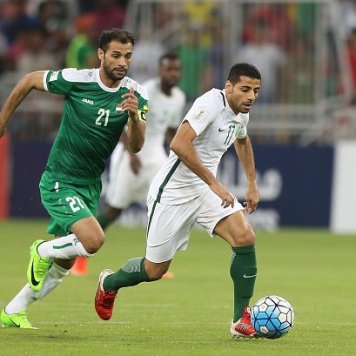 Radhi Shenaishil has his work cut out for him but there will be those standing behind him sharpening their knives. To those critics, I would point out that this game would have finished in a 5-0 defeat under any of the previous few Iraqi managers. Iraq failed to do the basics of football right up until Radhi’s appointment, where our tactics were simply lumping it up to a 40 year old Younis Mahmoud for the full 90 minutes. The only man equipt to make any noticeable change and improvement in this current situation is Radhi and it’s imperative he continues in his role as Iraqi manager to build for the future. Whether he will stay on in his position is unknown, especially given the fickleness of Iraq’s FA and fanbase. What we do know for certain however is that Iraq is currently in one of its darkest every footballing eras. Surely it can only get better from here?