I was born in Baghdad and come from a family of four – my parents and an older brother. My father and brother are both civil engineers. Nobody in my family is a footballer but we all support football teams and like to play football – my father supports Liverpool and my older brother supports Manchester United, so obviously there’s a bit of a rivalry there. I’ve never supported any particular football team, only the side I’m playing for. I speak Arabic and English fluently – at home, all we speak is Arabic.

When I was about three, my family left Iraq. This must have been around 1997 or 1998.  My father came to Scotland for work and we move directly from there. We live in the little place called Motherwell, which is 20 minutes away from Glasgow. As I moved from a young age, it was easy for me to settle in as I learnt English straightaway. I made friends easily at nursery and primary school so it wasn’t too difficult moving to a new country. There are a lot of Muslims and Iraqis in and around Glasgow so we’re not completely isolated. Only once have two Iraqi fans come along to watch me play. However, this was before my call up with the national team, so chances are they were probably Scouts rather than fans.

I was never that good at school and just want to play football. I left school a year early to go full-time at football and that’s always been the route I’ve wanted. My parents have always supported me but obviously they’re cautious because they know the football is risky – they wanted me to get my education sorted first before I go into football, as it will help me down the line. Unfortunately, I got to the stage where it was either full-time football or I continue my education but there was only one route I was going to choose. I love playing football because it makes me happy – any time I get any worries or troubles, I just play football and focus on that – it’s an amazing feeling playing.

I started off at a boys football club called Cambusnethan Talbot when I was nine. I played there for six years and I love it. Initially, my position was a left midfielder and then I was moved into central midfield, before eventually moving to centre back and left back. These are the two positions I play now – it helps that I’m left-footed.

When I was 15, I moved to Hamilton Academical, who are in the Scottish Premiership. The manager of Cambusnethan Talbot had left and I was left without a club. It came to the point where I was going to give up with football altogether but my friend had played for Hamilton, whose manager had seen me play previously. The coach told me to come in and train with them  just to see how things go. Right from the beginning, he really liked me and wanted to sign me. However, I was told that I only have a year to prove that I can be a professional footballer. It was make or break for me.

It was a difficult year because I was under pressure and I was flung into the deep end at only 16 years of age. All the players at the club had been at a high level from a young age but I hadn’t played at that level at all. Eventually, I found my feet and I started to enjoy my football – I had good coaches around me and soon I was starting for the reserves aged only 17. I signed full-time eventually but the manager seemed to focus only on the first-team squad, which meant that the reserves were neglected slightly. There was then a new manager brought in who really liked me and offered me a new contract. At that point, I was playing regularly for the reserves and was on the bench frequently for the first team. I was always on the bench or on the squad list, however, I never got to make my debut for the first team. There were a lot of experienced players in my position and throwing in a young defender may have been too risky for the manager. They were never any real injuries to players in my position during that time either, nor suspensions. I was unlucky in that sense.

I turned up for preseason at Hamilton in great condition. The manager said he was happy with my progress but wanted to see me go out on loan for some first-team experience. In august, I was loaned out to Cowdenbeath F.C. I’m playing regularly now but the team was struggling initially, which meant that I had a hard time too. We’ve finally started picking up results and, as a player and as a team, we’ve been doing really well lately.

I need first-team experience but once I have that, I hope to continuing progressing my career. I’m learning a lot now compared to when I was playing only at reserves level. Preferably, I don’t want to stay in Scotland because it’s not financially rewarding and the level of football isn’t the greatest either. I would love to move to England or even Qatar. When I first got the call-up to Iraq, there was a lot of interest surrounding me. I’m working hard to make sure that the interest continues.

I was contacted by Iraqi Professional Players, who made me aware of this opportunity to join Iraq four months before my call up. Initially, they contacted me asking if I wanted to play for Iraq but they made me aware that the procedure might take a while. If it wasn’t for them, I wouldn’t have had this opportunity because they sort everything out for me, including the paperwork – they even greeted me at the airport. I’m in regular contact with them too.

Since I was born in Iraq, this is a country that I want to be playing for. I was delighted when I heard the news of my call up – I was shocked too but saw it as a good opportunity for me to prove myself. Obviously, I was a bit nervous because I wasn’t sure exactly what I’m getting myself into.

Training with a national team was completely different to anything I was used to. All the players are extremely polite and have excellent manners – they all play with their heart. It was a bit difficult settling for the first few days but I was paired with Yaser Kasim, who was really good with me. Any time I needed help or advice, I would just go to him and he would guide me. He offered me little tips on how to impress, what to do, making sure I greet everybody and avoid being an outsider. With the whole squad, I understood what everybody was saying but occasionally it was difficult for me to join in with discussions. I got along with Yaser Kasim and Justin Meram the most.

The atmosphere at training was really good and there were no real issues. Everybody was just focused on winning the two friendlies to push us up the FIFA rankings. There was no controversy at the time. 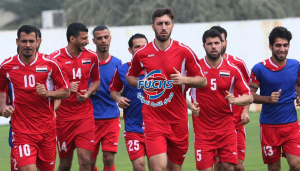 I accepted the fact that I didn’t see feature in the two games but I was disappointed since I wanted to play. To play for Iraq, I would always give 100% to the shirt and the fans. I’m a different type of defender to the players currently in the team. Many of the current defenders play in Iraq and are used to a certain style of play. They are all fairly similar players but I bring something different – I play a different type of game to them. Their style of play uses very fast, intense and aggression. My style focus on touch, passing and neat football.

There’s always controversy surrounding expat Iraqi footballers, but I think that that’s all nonsense. An Iraqi is an Iraqi, regardless of where they’re born or where they live. We all have different circumstances, some of which have led to people having to leave home. Many of the expat footballers still have family back home who we had to leave behind. All the players here want to represent their countries. Even though I’m an expat player, I’m always going to be Iraqi at heart. I love my country.

I watched the Iraqi Olympics football team and that was exciting seeing them reach Rio 2016. It was great seeing my friends Aymen, Bashar and Hummam doing so well, but the squad overall was different to the team I had trained with. I’m not sure why I never got an invite to the u23 side, but the change of manager didn’t help my chances. Any time that Iraq need me, I would go in a heartbeat just to represent my country. I would love to represent Iraq in Brazil this summer.