Among the hoards of tourists and city workers wandering around central London walks a figure unrecognisable to many, yet still idolised by millions across the world. After bombarding him with requests for an interview, Nashat Akram kindly invited me to join him for a coffee at his favourite spot in the capital. They say, “you should never meet your heroes” as the experience is often a disappointment, leaving you heartbroken. It was a risk I was prepared to take as I sat down with a player I’ve been watching throughout the entirety of his career, someone who I loved and often tried to emulate when playing football myself.

In my bag was a gift given to me by a friend: a match worn Nashat – 5 – Iraq jersey, which I’d treasured for years. I brought it along with me for him to sign; it acted as a reminder that I wasn’t just there to interview him. Rather, I wanted to spend an hour with the person who gave me so much to smile about. Someone who dragged Iraq to a 1-0 win against bitter-rivals Saudi Arabia in the Asian Cup 2007 final with a Man of the Match performance – arguably the best day of my life. It was a once in a lifetime opportunity to thank him in person for ‘that day’.

As he walked over to sit down, the first thing that stuck me is his mannerism. At 6’ 1”, Nashat is significantly taller than most Iraqis and yet his physical presence is hardly intimidating. Instead, he carries himself elegantly and modestly. He made his way over and greeted me, as if I was an old colleague. Unsurprisingly, I remained star-struck. After taking a deep breath and mentally regrouping, I remembered this was my only chance to get to know the person behind the footballer. I wanted an hour interview with Nashat Akram – he gave me four. After ordering our drinks, this is what we discussed:

My situation was no different to any other young Iraqi living in Baghdad at the time. Everything was difficult back then. Especially in the 80s, with the Iraq/Iran war and then the Gulf war in the early 90s – they were tough times to live in. There were sanctions imposed on the country and obviously this caused great suffering for everybody. Growing up in such circumstances, you develop certain aspects of your character that you may not have attained otherwise. It was a difficult childhood but you have to focus on the positives and use the experiences to your advantage.

I started off playing in the streets before moving to grassroot levels, as is the case with many footballers. Growing up, there was only my older brother who played football but he never made the step up to professional football. My parents were insistent on me prioritising my studies but eventually opened up to the idea of me becoming a footballer once they saw my potential. I had an insane love for football growing up – we would always be playing whether at home or out and about. Sometimes we’d play a few times a day. I realised what I could offer on the pitch at a young age and knew that it was the only career path for me. I took a risk and neglected my studies to focus on football, and fortunately it paid off. Otherwise, I have no idea what life would’ve had in store for me in terms of a career. [Jokingly] Maybe I’d have been a thief!

Watching the national team and Iraq league games at a young age was what really inspired me. There were many players who I looked up to and wanted to have my picture taken alongside; the likes of Ahmed Radhi, Laith Hussein and Saad Qais, to name a few. I was lucky in that I actually fulfilled these dreams and even got the chance to play with some of them. Now I’m even friends with a few. Some years later, Ammo Baba was managing me, which was insane. As kids, we would dream of just having our pictures taken with him. To actually have him coaching me and helping me develop when I was a young player is beyond my wildest dreams. He was fantastic and taught me so much about football but also about life in general, most of which I still practice. I really am indebted to him, as I am to a lot of the coaches I had throughout my career. They all offered me something different and helped me grow as a person.

I never tried to replicate any players in my style though. The way I see it, if you try to copy someone else, you’re going to fail. You should always be yourself. I did love Zidane and Ronaldo though – I never supported a team growing up – I just supported whomever they played for. I followed Ronaldo’s matches even when he moved back to Brazil!

I have many memories of my childhood in Iraq. When I first started with Al Shorta, aged 17, the manager there didn’t want me and less than a year later I was in the first team – I was the star player too. I wanted to see how the manager would react to this and he was always extremely shy whenever we met. He expected me to be rude and rub it in his face but I avoided doing anything like that. He’s a nice person and was very respectful.

It was all down to hunger. If a human being has hunger and desire to succeed in anything, they will do everything they can to ensure that they do. I took part in intensive training during preseason to prepare myself for the upcoming season. I had the desire to succeed on the pitch with my club and to succeed financially on a personal level. I wanted to be the best player at my club, but my aim was not to be the best player in the league. I wanted to help my club first and foremost. The league itself had many big players from abroad and from the Gulf, so it was not an easy feat to beat them all to the award. Fortunately, my efforts throughout the season were rewarded with a superb award.

I’d officially signed a two and a half year contract with City during the winter transfer window. There were offers from a few other clubs plus rumours of a move to Sunderland, but there was no formal offer from them. Realistically, there was no better team to join at the time than Manchester City. I’d trained with them, passed all the medical checks and everything was set.

Unfortunately, the work permit was refused and this prevented me from completing my move. City appealed the decision but that was rejected too due to Iraq being outside the top 70 of FIFA rankings. A lot of players are able to bypass this by playing in other European countries and then making a move to England, but because I moved directly from the Middle East, things were more complicated. I was offered a chance to go on loan to an affiliated club in Sweden but the contract offer was significantly lower in wages compared to the deal I had at City. Probably even five times lower than the contract I’d agreed with the Manchester club. I decided to turn down the opportunity and move back to Al-Ain (U.A.E) to see out the remainder of my contract. I was really upset but I tried not to let it get to me and affect my form. I always tell myself that God has a plan for everyone and if something doesn’t happen, then it simply isn’t meant to be.

It’s up to the people in charge of Iraqi football to plan for the future and navigate things so that Iraqi players are able to make their way across European leagues where they can bypass the work permit issue. Sadly, there’s no proper planning from the Iraqi FA or from the Ministry of Youth and Sport. Having said that, it would be difficult to argue that any current player in Iraq deserves to be in the Premier League.

There were a lot of challenges during my time in Holland. Looking back, the biggest regret I have was making the transfer so late into my career. Things would have gone a lot smoother if I had moved at a younger age. Once you get accustomed to a certain luxurious lifestyle, which we had experienced living in the Gulf, it becomes almost impossible to move to Europe and leave it all behind.

Living in the West, the social life is completely different to home. You have to get used to seeing new faces and missing your friends, which isn’t easy. It was definitely a factor that influenced my decision to leave Twente prematurely. 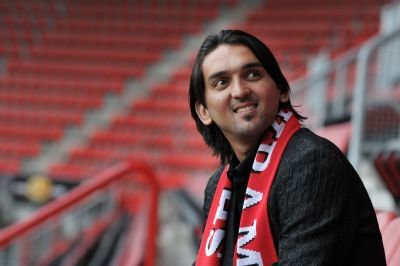 In hindsight, it was a big error leaving – it was my decision to do so and I made a huge mistake. Still, it was a great experience and I learnt a lot from my spell there. I won the league too and still have my medal. If I could go back in time, I’d advise my younger self to be patient and make use of this once in a lifetime opportunity. When you’re in a team as big as FC Twente, in a league as impressive as the Dutch league, you should strive to be as successful as you can during your time there. I’m the first to admit that I was wrong to leave but you have to learn from your experiences and move on.

I knew moving to a place so alien to me will be tough but I couldn’t predict what would happen after I got there. Shortly after playing in the first four games, I got injured and continued to pick up small niggles. The club failed to pay me my wages during a four or five month period too and so it was best to leave. I’m in an ongoing court case with them as we speak.

As a footballer, I felt a better player towards the later stages of my career. People might argue that I peaked in the Asian Cup win but I honestly played better in the latter World Cup Qualifiers of my career. You get those who tell me that the 2007 tournament was the only time they saw me defending and attacking in the same game. I disagree, because your game naturally changes with experience and age. You can learn plenty just from training sessions. Even right now, with the experiences I’ve accumulated after such a long career, I’m still a better footballer at present than I was in 2007.

Adnan Dergal helped me develop as a footballer a lot but my game changed the most during my time in Holland when I was managed by Steve McClaren. I had a great relationship with him and we communicated well together as I spoke a spot of English too. It did take some time getting used to his accent though!

Suarez is probably the best player I’ve ever played against. I was at FC Twente when he was still playing for Ajax. He didn’t bite me!

There are dozens of shirts that I’ve accumulated over the years – too many to name. The most touching incident would be when Iraq played Australia and Zico took me off after 80 minutes. I was sat on the substitute’s bench and Tim Cahill came over at full time to ask for my shirt. When a player as big and respected as Tim Cahill goes out of his way to swap shirts with you, it really means a lot. I still have his shirt at home.