Following a recent u-turn from FIFA to partially remove the ban on Iraq from hosting international home matches, the Iraqi FA were quick to celebrate this opportunity by arranging an official friendly tie with neighboring rivals Jordan. Football was well and truly coming home as the Lions of Mesopotamia took to the field on home soil for the first time since 2013.

The Basra Sport City Stadium hosted 60,000 spectators who turned up hours before kick off to create a thrilling atmosphere for players and fans. Basra was selected as one of three cities eligible to host international fixtures, along with Erbil and Karabala.

Despite the majority of fans fasting due to the fixture being played during the holy month of Ramadan, it did not stop the Iraqi jumhoor from turning up in their droves. Among the attendees were the Jordanian Prince and Head of the Jordanian FA, Ali Al-Hussein, together with Iraqi Prime Minister Haidar al-Abadi and Iraqi parliament speaker Salim Al-Jabouri.

The fans were rewarded with an memorable win thanks to the hard efforts of a squad missing many key players due to injury or club duties. It was an early goal by Alaa Abdul-Zahra that secured the victory for the hosts after a quick counter attacking move. It was Ali Husni, the only Basrawi on the field, who fittingly picked up the ball and dribbled passed opposition players. His pass to Hammadi Ahmed saw the attacker deliver an inch-perfect cross that was headed in by captain Alaa Abdul-Zahra. The moment the ball hit the back of the net, the stadium erupted in celebration as the fans went ballistic. Bassem Qasim’s spell as interim manager is off to a great start following the one-nil victory for the Lions of Mesopotamia.

This fixture marks the first of many that are expected to take place over the upcoming months. Iraq has been granted a 3 month probation period to prove that it can host international home games without security risks to attendees. Once the three months are over, FIFA will evaluate the situation and decide whether to remove the ban in its entirety. Security was tight in the stadium, where over 5,000 members of the security forces attended to ensure secure passage to and from the stadium. Ali Adnan stressed the importance of FIFA lifting the ban, “It is very important that we return to playing in front of our fans. We hope that the Iraqi team’s official matches will return to our stadiums.” 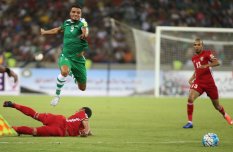 After the 90 minutes were up and the hosts had secured a treasured victory, the fans responded in the most Iraqi fashion possible – they stayed behind and cleaned the stadium. It was a brilliant display of solidarity in a time of economic and political difficulties. Iraq sent a warning to ISIS that nothing will separate Iraq and its people – especially when it comes to football!