Iraq started their U23 Asian Cup campaign at walking pace with an easy victory over Malaysia. The Lions looked completely dominant right from kickoff, with Safaa Hadi and Amjed Atwan running the show.

Bashar set up the first with a sensational cross using the outside of his boot, which was headed in by Mohammed Jaffal. Amjed Atwan extended the lead with a low driven shot into the bottom corner. 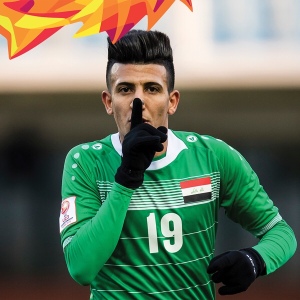 Bashar grabbed another assist for Iraq’s third in the second half. His well weighted through ball was cleverly worked by Alaa Mhawi, who cut back on his left and curled it passed the goalkeeper.

Iraq stretched the play really well and Malaysia struggled to cope. Iraq proved too strong and too fast, with Hamza Adnan and Alaa Mhawi working the channels with their overlapping runs. Safaa played admirably with a disciplined performance as a holding midfielder. His positioning and reading of the game was excellent, with him making countless interceptions. This gave Bashar and Hussain Ali plenty of freedom to operate in the space behind Farhan Shakor in the final third.

Malaysia offered very little going forward and Ahmed Basil make only one save of note. Despite this, Safawi Rasid’s shot somehow found its way passed the goalkeeper who should’ve done far better. Their comeback was short lived though, as Hussain Ali capped off a fine performance by rounding the goalkeeper and slotting in an empty net.

Iraq could’ve scored more and were careless at times but they understandably took their foot off the pedal in the second half. Their demanding schedule meant that the players must conserve their energy for later games – especially their next group game against fierce rivals Saudi Arabia on Saturday.

With three points in the bag, this result takes the pressure off manager Abdulghani Shahad. There were doubts over how Iraq would cope without Mohamed Dawood, who’s absent through injury. This result may go some way to silence the doubters.

Man Of The Match: Safaa Hadi

One thought on “U23 Asian Cup Match Review: Iraq 4-1 Malaysia”