Football can often be a force that unites an entire nation when all else has failed. However, there are times when football can crush a country’s spirit after a disappointing result. Having produced two memorable performances in the first two group games – against Denmark and then Brazil – all eyes were on Iraq to take on Bafana Bafana. The Lions of Mesopotamia were expected to put the South Africans to the sword and ensure qualification to the knockout stage with an easy win. Sadly, the Lions were unable to achieve the kill.

Abdulghani Shahed had brought in Mehdi Kamil and Ali Hosni for Sherko Kareem and Mustafa Nadhim, whilst Saad Natiq was moved to central defence. The manager was approaching the game with the intention of winning the game right from the off, which was a good sign. Iraqi managers have previously been guilty of showing their opposition far too much respect, often with underwhelming results – the Confederation’s Cup in 2009 rings a bell, ironically against the same opposition. 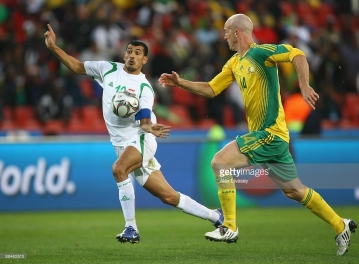 of South Africa of Iraq during the opening match of the FIFA Confederations Cup between South Africa and Iraq at Ellis Park Stadium on June 14, 2009 in Johannesburg, South Africa.

Once the kick-off whistle had blown, Iraq took the game to the opposition and made their intentions clear – this side were here for the three points. The Iraqis were off to a promising start, passing the ball well and maintaining a high tempo that the South Africans struggled to contain. The number of fouls awarded to Iraq testified to the high pressure that the Iraqis defended with throughout the 90 minutes. As is nearly always the case with Iraqis, we rarely ever do things the easy way. Instead, with six minutes played, a slip by Dhurgham down the left allowed a lofty ball to be played into the Iraqi box, which Saad Natiq failed to clear. Gift Motupa was left to smash the ball into the back of the net.

84 minutes remained for Iraq to turn things around – a doable task given the quality at Abdulgani’s disposal. The Iraqis responded in style, bombarding the opposition from all angles. The South Africans struggled to cope with the intensity of Iraq’s play, giving away cheap fouls and conceding possession in their own half. The Iraqis threw the kitchen sink, the cabinets, the tableware and anything else they could get their hands on at the opposition for the duration of the game.

Ali Hosni had bullied the South African defence for the entire first half. On the 12th minute, his mazing run had seen Mohanned Abdul-Raheem’s shot cleared of the line. His follow up attempt was lashed wildly out of play. The first of many wasted chances.

With 14 minutes played, Ali Adnan’s wonderful whipped corner landed on the head of Iraq’s captain. Saad Abdulamir scored Iraq’s opener with a powerful header that thundered beyond the ‘keepers hapless reach. The seasoned international celebrated in style as he sealed an impressive tournament with a goal to his name, a fitting accolade for Iraq’s best performer. The goal was Iraq’s first of the tournament and proved to be the only one that the attack could muster.

Saad Leaping For The Header

With the scores level, it only ever looked like one team will be going away with the victory. Iraq pressed on looking for the winner, with Ali Hosni, Mehdi Kamil, Amjad Atwan and Ali Adnan all having opportunities to put their team in the lead but falling at the final hurdle. Khune Itumelend, the South African goalkeeper, saved well once again from Mohanned Abdul-Raheem, whose scuffed shot was pushed out for a corner on the 37th minute mark. Ali Adnan came closest with 40 minutes played, smashing his volley against the post from 12 yards out. Ali Hosni crossed ball landed perfectly for the makeshift winger, who struck it cleanly but Allawi could only walk away scratching his head in frustration. The seconds trickled away as the halftime whistle blew – Iraq had failed to capitalise on their dominance and would undoubtedly live to regret the missed opportunities.

The game picked up where it had previously ended, with Iraq rampaging through the opposition defence but unable to find the crucial winning goal. It was the equivalent of a boxer cornering his opponent in the ring, whilst throwing punch after punch, but failing to land the killer knockout blow. 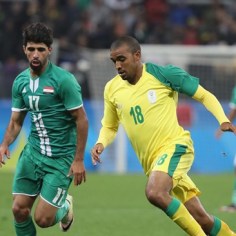 Chances were plenty and players remained guilty of wasting opportunities that landed their way. Atwan, Mehdi Kamil and Mohanned were yet again unable to find the back of the net, the latter coming closest with a header that shaved the post. Saad Natiq was next in the firing queue – his glancing header smashing against the post from an inswinging Ali Adnan freekick.

Abdulghani had played the majority of his cards right during the tournament, but his first questionable judgement saw Ali Adnan and Ali Hosni come off for Sherko Kareem and Hammadi Ahmed.

Fatigue can be the only justifiable reason as to why the two best attackers in the team would be taken out. On paper, the decision can be justified as the manager would have wanted two strikers on the pitch, with Hammadi and Mohanned leading the line. Sherko would have fitted in the number 10 role behind them. However, Hammadi ended up playing on the right, looking lost and unsure of his expected role. Meanwhile, Sherko lost the ball more times than he could muster a pass to a teammate. The failed substitution had taken the wind out of Iraq’s sails and a goal now looked wishful thinking. Chances continued to be wasted as Kamil and Sherko were both guilty of missing sitters. With ten minute left, Hummam Tariq replaced Mehdi Kamil in what was yet another bizarre substitution. Hummam has frequently been tried at the top level and has continued to disappoint, with this game being no exception. His only positive contribution came as Hammadi stretched but couldn’t connect with his overhit cross  (86′).

A flurry of half-chances followed but the winning goal was nowhere to be seen. Hammadi’s disallowed goal coming closest, with him netting after the referee had blown for offside. The fulltime whistle blew and Iraq had fallen short after a promising start to the game. Fans have argued that fortune favoured the South Africans, given that Iraq had struck the woodwork three times. However, with 29 shots, it’s hard not to identify poor finishing as the deciding factor. Both teams were sent crashing out of the tournament, in spite of Brazil’s 4-0 victory over Denmark in the group’s other fixture.

As disappointing as the result was, hindsight allows us to see things more rationally.The tournament performances as a whole were promising, with plenty of positives to be taken. The squad is young and the players will hopefully learn from the errors of this tournament. Iraq also remained unbeaten in the three games and were desperately unfortunate not to earn something more rewarding following their brave efforts.

Another major positive point being the ease to which the midfield was able to pass the ball and maintain position in tight spaces. This contrasted completely with the Iraqi National Team, who lump the ball forward at the earliest opportunity. Instead, the Olympic team displayed a calmness that will hopefully cross over to the national side. A lot of this was due to the presence of one Saad Abdulamir, or Saad Luaibi, as his shirt read throughout the competition. The midfielder has well and truly set the benchmark for the standard of quality expected from Iraqi midfielders hereonout. Additionally, with the World Cup Qualifiers around the corner, it may work in our favour that the premature end to the tournament will give the players a much needed break. This is especially the case given the sheer number of players who are selected for both the Olympic and National team.

Attention must now turn to Australia, where Iraq will hope to get their World Cup Qualifying campaign off to a winning start. It’s going to be a long Road To Russia 2018.